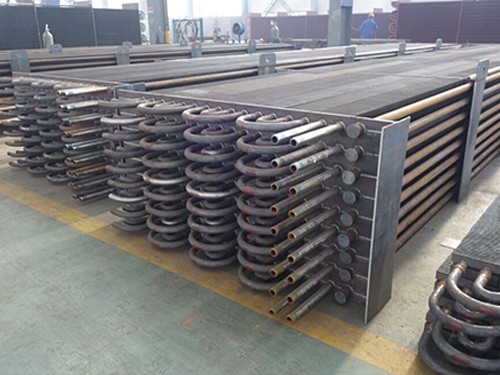 1. The fin is divided into two symmetrical half pieces, and the tube wall is pressed from both sides. Resistance welding is used to weld the tube wall, leaving certain gaps in the middle;

2. Two round tubes can share a set of fins, called double tube h-fin, or just put a round tube in the middle, called single tube h-fin.

3. The heat exchanger composed of h-type finned tube is arranged closely and the tube bundle is arranged in a straight line.

The influence of h-shaped finned structure on ash accumulation and wear: the gap between the two pieces makes use of the flow of flue gas and the erosion of ash, because there is a high flow rate of flue gas in the gap; The pipes are arranged in a straight line with little resistance and little wear. H-type fins can effectively utilize the flow space and maintain a large fin area and finning ratio. The thickness of fin can be chosen according to the need of wear resistance. The fins are parallel to each other and independent, without the influence of spiral Angle, thus facilitating ash removal.