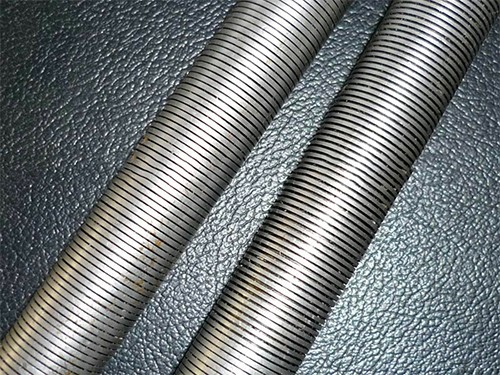 T-type finned tube heat exchanger is a kind of high efficiency heat exchanger formed by the rolling process of the light tube. The structure features a series of spiral loop t-shaped tunnels on the outer surface of the tube. When the medium outside the tube is heated, a series of bubble nuclei are formed in the tunnel. As the medium inside the tunnel is heated all around, the bubble nuclei rapidly expand and fill the inner cavity. Continuous heating rapidly increases the pressure inside the bubble, so that the bubbles are rapidly ejected from the thin cracks on the surface of the tube. When the bubble is ejected, it has a large scouring force and generates a certain local negative pressure, which makes the surrounding cold liquid pour into the t-shaped tunnel and form a continuous boiling. The heat carried away by this boiling method per unit surface area in a unit of time is much larger than that of the light tube, so this tube type has a higher boiling heat transfer capacity.

(1) good heat transfer effect. In R113, the boiling heat transfer coefficient of T tube is 1.6-3.3 times higher than that of light tube.

The single tube experiment with freon 11 as medium shows that the boiling heat coefficient of the t-tube can reach 10 times of the light tube. The total heat transfer coefficient of small tube bundle with liquid ammonia as the medium was 2.2 times that of the light tube. The reboiler industrial calibration of the C3 and C4 hydrocarbon separation towers shows that the total heat transfer coefficient of the t-tube is 50% higher than that of the smooth tube at low load and 99% higher at high load.

It is cheaper than aluminum porous surface heat transfer tubes.

Because the gas-liquid disturbance inside the tunnel is very fierce and the gas is ejected at a high speed along the T seam, it is not easy to form scale inside the t-groove or on the outer surface of the tube, which ensures that the equipment can be used for a long time and the heat transfer effect will not be affected by the scale.